See what growers are raving about.

From Japanese nursery professionals, Be-1 Pellets are an entirely new approach to feeding your plants by focusing on organic acids to stimulate your soil microbes. Be-1 leverages latest advances in amino acids research to exponentially increase your beneficial soil microbes, while feeding your plants. Literally, awakening your soil.  After all, it all starts below.

Beyond an old-school NPK ratio of 3-6-5, a very respectable macro-nutrient content for a wild-sourced and organic fertilizer, what sets Be-1 apart is its calcium content of 1.57% and its amino-acid based formulation, making it a powerful bio-stimulant for exponentially increasing beneficial microorganisms in your soil and contributing to health of your plants.

When mixed with humus, independent lab results show that the amino acids in Be-1 pellets exponentially increase beneficial microorganisms, including bacteria, fungi and protozoa.  Most impressive are counts of the protozoa (amoeba and flagellates), which are the microorganisms that help convert nutrients into plant-available forms.

What does this mean?

The symbiotic relationship of plants and beneficial microbes…the Soil Food Web. Compost and compost teas are among the best ways to add organic matter to soils and other mediums for plant growth and soil revitalization. They are inexpensive and relatively easy to make, while adding microorganisms that help break down decaying matter.

[It is these microorganisms that Be-1 exponentially increase]

Microbes are so vital that plant roots excrete a chemical called “exudates,” compounds such as sugars, to attract beneficial microorganisms (bacteria and fungi).  The microbes eat the exudates, creating a symbiotic relationship with host plant by:

1. Providing a natural defense by competing with disease causing microorganisms
2. Building micro-aggregates to improve soil tilth through aeration and moisture retention
3. Eating nutrients in the soil and storing them before releasing to your plants.

However, the cycle is not yet complete. Many of these nutrients are in a form not yet usable by plants. The protozoa (including amoeba, flagellates and ciliates) eat the smaller bacteria, and even other protozoa, transforming these previously unusable forms of nutrients into forms that are available to plants.  When the protozoa release the nutrients, they are then available to plants.

Bacteria have much higher nitrogen needs than larger protozoa, so when bacteria are consumed, excess nitrogen is released in the form of ammonium (NH4+) which attracts and increases bacteria, and some immediately taken up by the host plant.

UPDATE June 17.
Release of the pellets are not expected this growing season.
We are making progress, but just much slower than hoped. Better to do it right and not release prematurely.
We will try to at least release the amino acids paste that go into our pellets before the end of July.
Super apologies for all inconveniences.

+++ (Previous Announcement)
This is usually a warehouse full of amino acids pellets, but the past year has been tough on us too. …sometimes in adversity, one may really find opportunity.

While Covid hit our ingredient suppliers hard, we have been working diligently to make our flagship Be-1 Pellets more sustainable by moving fermentation to Oregon. The move is also a chance to implement some long-planned improvements using the latest in amino acids research.

While taking much longer than hoped and a big mea culpa for the lapse, we promise it will be worth your wait.  Hopefully sometime in June.

Meantime, we do still have plenty of Be-2 Inoculant and Be Teabags.

Thanks for your continued support ✌🏽
-Be Organics team 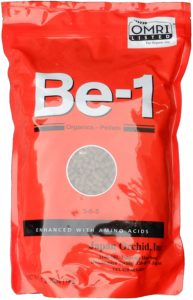